A lot of people ask me how I had the courage to “come out” and advocate for an illness so shameful that most of the world doesn’t even know it exists. Some believe that picking your skin is a “disgusting habit” or that engaging in this behavior on a compulsive level is an indicator of a character flaw or lack of willpower. These are still things that I hear from random strangers online but I know that I’ll never hear from again- it’s just a passing interaction. Does it bug me? It’s always an initial sting, but details of these derogatory/ ignorant comments no longer remain etched in my being like it used to and I also know that it takes someone with low self-esteem to make these crass remarks in a poor attempt to feel better about his/ her own life.

It’s easy to make this argument on a logical level, but emotionally I’ve always struggled as my head and heart don’t always match up. For most people this means that their head says one thing but their heart wants something it shouldn’t have- for me it means that I can’t always identify what my heart is saying, but I’m headstrong and able to ‘manage’ these uncomfortable feelings, whatever they may be.

Looking at what I’ve done over the years for the Dermatillomania cause, I can’t share an epiphany about how I’ve come out and become “the poster child” for this cause (as Fox 11 News dubbed me) because it was a gradual process. I used to be afraid to join any support groups online using my real name/ identity because I didn’t want my friends or acquaintances to catch on to what was eating me up inside and tearing apart my exterior. The world isn’t “black and white” so every decision I made to move forward in my awareness was made based on where I was at with my personal recovery and I challenged myself to build onto the progress I had previously made.

Many people believe you have to be a certain kind of special to shed light onto such a taboo subject… but you don’t have to “be” anything but yourself. Life for me has gradually improved based on the steps I’ve taken with each step being that much closer to true empowerment of accepting who I am fully. Each accomplishment has been something to celebrate because it confirms that I am capable of fighting for what I believe in. My jotted “resume” is as follows:

2005: Anonymously blogging online specifically about my experiences with skin picking, trying to make sense of it on my own; it was a place to vent because I felt no one could understand what I was experiencing.

2006: Anonymously (with the same YouTube username I still maintain, anonymity86) I uploaded a powerful homemade video about my distress with having Dermatillomania. Can’t remember when I finally attached my name to the account.

2007: Performed a monologue two nights in a row revealing my scars at “Fricassee Festival”, a festival of one act plays I also produced.

Sept. 2007: Through the “Causes” website, formally connected to Facebook, I rallied over 1,300 members to one I created- “Dermatillomania”. Through this site, you can raise money for a non-profit organization and I listed TLC as the beneficiary.

June 2008: Was asked to become a moderator of Dermatillomania Awareness on Facebook after the creator was inspired by the awareness I had created at this point. At the time the group barely had 200 members- now it has a little over 1,000.

Spring 2009: Did a presentation in my Child & Youth Care class on Trichotillomania with a section on Dermatillomania, how it can be diagnosed as Trich because it wasn’t in the DSM at this time. My class didn’t receive it well and a few comments were made regarding how disgusting the images shown were. They knew I had this disorder too.

Dec. 2009: Introduced by CTV in the first television interview about Dermatillomania, also marketing my book.

2010: Started filming the “Scars of Shame” documentary, a story about my struggles with this disorder.

Apr. 2011: Filming continued at the TLC Conference in San Francisco. Facilitated a filmed workshop dedicated to talking about experiences with Dermatillomania.

May 2011: Did an interview with Fox News11 LA. Also took part of a quick fundraising campaign through Indiegogo for the documentary that ended up earning over $5,000. 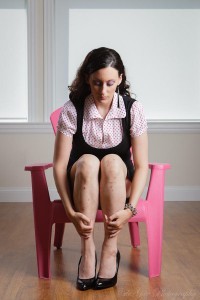 July 2012: Was added as a Facebook administrator for the worldwide “Mental Health” and “Mental Health & Relationships” pages, to provide original pieces of advice to followers. These platforms have also allowed me to promote Dermatillomania awareness. It was also the first photoshoot I’ve done specifically (other than for my book) to be a “Derma- Model”.

Nov. 2012: Was featured on a segment of GMA News 7 Philippines and launched this website.

Jan. 2013: Wrote a post called “12 Dermatillomania Myths Dispelled” which spread like wildfire in the community with the result of placing 2nd in Google when you search “Dermatillomania”, right below Wikipedia. I was also featured in the 1st chapter of “The Derma Project” from a channel dedicated to telling stories of Dermatillomania sufferers.

Feb. 2013: Was offered a Board of Directors position after inquiring about it with the Canadian BFRB Support Network’s Executive Director, Sarah Robertson. Article written for TLC’s “InTouch” newsletter was published.

March 2013: Made business cards… although it’s missing something vital! (can you see the error?)

May 2013: Interviewed by The Canadian Press in an article that was published in at least 25 different news outlets. In this, I shared a bit of my story and recommended that Canadians stay informed about BFRB awareness through CBSN.

June 2013: Given the unofficial title through CBSN as “Outreach Co-ordinator” while helping out with awareness/ funding campaigns.

None of this came easy. Every step induced anxiety, which I still battle with daily. It’s just been in my heart to overcome the stigma that overshadows the raw reality of this disorder and to pay it forward to those who are where I’ve been. Although my awareness journey officially started when my book was published, the struggles documented in “FOREVER MARKED…” are from way before I was able to figure out how I could live my life while having this disorder. My high school years were lies as I casually pretended that I was alright, just to be treated like everyone else when inside I felt like a freak. People noticed something was “different” about me but no one could imagine it was this… I didn’t even know in high school what I had. For years I lived in that agonizing suspense of being “found out” and having my whole world collapse on me; being shunned, bullied, and not having any chance at normalcy.

I was wrong. Plus it’s not “normal” to keep such a secret hidden in plain sight, just teetering on the edge on a life-ending scenario. This is what my life was like and I challenged myself slowly, little by little, pushing my own boundaries in what I felt comfortable doing. Secrets are consuming and keeping this from everyone in your life contributes heavily to the feeling that you ARE Dermatillomania instead of it only being a part of you. It has been my journey that I’ve had control of and have chosen how to react to negative responses by being reminded just why I need to keep advocating for educated awareness.

You don’t need to have your darkest thoughts on display in book form or have your life exposed in a documentary to be empowered to contribute to the efforts of the Dermatillomania/ BFRB community. Share links, comment on articles, blog about it… these efforts make a HUGE difference when others see the growing number of supporters and want to be a part of it. The thing is, we have to be those supporters or else no one will ever speak for this cause. I speak thoroughly about the need to “come out” in health coach Annette Pasternak’s interview (worth the read, I promise)! Break the expectations you place on yourself of never being able to tell your secret, never being able to join a support group under your birth name; being this secretive about something that affects your daily life is a recipe for a less satisfying quality of life. Societal expectations can’t hold you back unless you allow them to.