As an episode of Dr. Phil was coming to a close yesterday, a commercial about 21 year old Samantha caught my eye; she is a skin picker who cannot stop “disfiguring” her face and body, according to the enthusiastic narrator of the daytime talk show. This set off alarm bells for me because of the last time Dr. Phil introduced a young woman to his show, April, who talked about her skin picking he dismissed her pleas for help regarding the picking while focusing on her possible on-the-spot diagnosis of Body Dysmorphic Disorder.

This time, Samantha’s picking could not be ignored because her face, arms, and legs are visibly marked up and it’s something she engages in with her sister. I remember doing the exact same thing with my sister while growing up but neither of us knew at the time that it could become problematic because it’s not something you learn about in school. Just like with these sisters, my sister and I have been side-by-side popping pimples a countless number of times- the only difference was, my sister could leave the bathroom while I only got more comfortable wrapped up in the behavior for hours at a time.

I’ve made my pleas with the Dr. Phil Show to do an episode about Dermatillomania and have even asked him to be on the show. After April’s segment aired and my attempts didn’t pan out, I desperately asked the BFRB community to contact Dr. Phil through different mediums so that I could be on the show to provide more insight into Dermatillomania, share my resources, and maybe even get specialized help for my picking. At this point in my life, my main efforts are directed to awareness more than toward a chance of my own remission because I don’t have the resources in my area to embark on the strenuous and complex journey it will take to reverse the grip this disorder has on me. I’m okay with that for now- not happy to still suffer from it, but I have learned to live my life as is and make the best of the hand that I’ve been dealt. 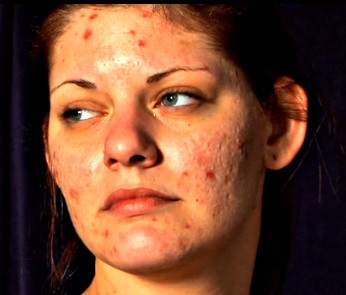 This isn’t always possible for people and in order to draw the conclusion I have when you don’t have a support system in place, you have to have hit rock bottom first. The Trichotillomania Learning Center (TLC) became a part of my journey after my book was published and I was already living an adequate life despite having this disorder. In general, Dr. Phil always claims that he has access to the best resources/ professionals for guest’s aftercare but he didn’t invite anyone from the only fully-funded organization in the world to appear, even when TLC’s Executive Director, Jennifer Raikes, lives in the same city his studio is located in! This had me very worried and I feared for Samantha on a potentially sensationalist episode with no one from TLC to stand by her side or correct misinformation that may be presented about Dermatillomania. Was this done on purpose? We know that producers must do extensive homework when choosing guests and learn everything about the topic possible, including supports and treatment options, so why omit the most powerful worldwide influence in the BFRB community?

I get that the media has to spruce up certain elements of what they present for the sake of ratings but having the narrator begin the show by calling skin picking a “bizarre” behavior is false because most people do it as a form of grooming (which is normal) and it is also alienating for those of us who already feel peculiar or strange for being compulsive skin pickers. Dr. Phil’s introduction to Samantha’s story was appropriate and he also mentioned that she has Trichotillomania, although it wasn’t mentioned again during this episode nor was it discussed how interlinked the two BFRB’s are. Her video showed exactly what I go through, what I suspect all of us experience as seasoned skin pickers. Seeing her distress was bitter nostalgia for me, especially when she mentioned later onstage that she is “not knowing what she’ll do to herself“. This was absolutely heart-breaking because I want to tell her that LIFE doesn’t have to include that despair and picking doesn’t have to destroy everything; I felt for her and yearned for her to get the help she deserved. I was gunning for her success in beating this vicious disorder to become one of the few success stories out there.

She was instructed, like April was, to remove her makeup which is mostly for theatrics but I am glad that Dr. Phil did say that her picking “has nothing to do with acne”. For the public’s perception, I am concerned over her Xanax and alcohol abuse being brought up as a possible trigger for the disorder because of the misconception that people who pick their skin also do drugs. I became uncomfortable when he asked her when the last time her mother complimented her because I also feared that the direction this part of the show was taking was seemingly toward a parenting issue. However, it is possible that her family dynamics contributed to her history that spun this disorder out of control, but luckily Dr. Phil took this no further. He did ask the mother how she couldn’t have seen this but he, and the public, must understand that this hasn’t historically been a disorder to “look for” with no warning signs available to the general public when even most doctors will dismiss this.

I am glad that Dr. Phil went into the details of Excoriation Disorder, making reference to the DSM 5. Unfortunately, the idea of treating the underlying anxiety issues to take away the need for gratification is not always effective in eliminating the behavior. He is completely correct in wanting her anxiety treated so that her urges may decrease but she will still need specialized treatment in reversing the ingrained behavior itself. Replacing it with a healthy coping mechanism is ideal, but extensive treatment is needed in order to not revert back to picking- is he willing to put the money into a trained professional in her area for as many appointments as it takes for his optimism to become reality? Dr. Phil stated that this was an “emergent situation” and I agree that all of us who pick to this degree are putting ourselves at risk psychologically, emotionally, and even physically. While my current mental state about how my disorder affects me keeps me safe emotionally, I still risk more scarring, infections, body pains (from twisting my body in order to pick) and physical malformations, like I have with my chin which is discussed and shown in FOREVER MARKED: A Dermatillomania Diary. What he also failed to mention, or consider, is that not any ole’ therapist can treat this- it takes that specific training to know how to effectively reduce urges (not eliminate, in most cases).

Overall, I do think this episode was an affirming gateway to discussing Excoriation Disorder thoroughly in the future; as an introductory segment that actually acknowledges the issue at hand, I was pleased. I do wish that it took up the full hour- not because of my obviously close attachment to this struggle but because it is not a well-known issue that thousands are suffering from in silence. In the future, I believe that Dr. Phil should do a half hour segment on Dermatillomania, half on Trichotillomania, and invite a member of TLC (or Christina Pearson!) on for additional insight, expertise, and for collaboration. Not only that, but the show should contact BFRB specialists such as Dr. Fred Penzel, Dr. Charles Mansueto, or Dr. Jon E. Grant to provide their guests with “the very best” and live up to that claim.