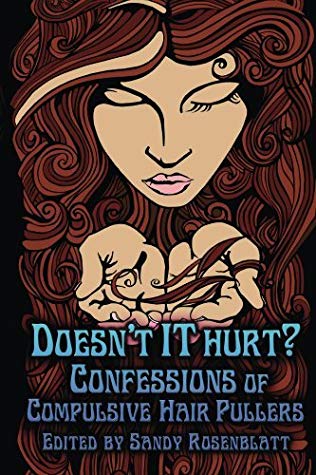 Similar to the Project Dermatillomania series, Doesn’t It Hurt? Confessions of Compulsive Hair Pullers by Sandy Rosenblatt is a compilation of real stories from people who have trichotillomania. As suggested in the title of this anthology, trichotillomania is a disorder that causes a person to pull out their hair compulsively. In the last diagnostic manual of mental health (DSM IV), trichotillomania was categorized under Impulse-Control Disorders. Currently, the DSM 5 has both trichotillomania and excoriation disorder (aka dermatillomania) falling in the Obsessive- Compulsive and Related Disorders category.

Unofficially, trichotillomania and dermatillomania are classified by a variety of disorders called body-focused repetitive behaviours (BFRBs). These disorders may not manifest the same way, but they are driven by a similar urge for relief through a behavior. Rosenblatt’s book highlights many sentiments we have faced in the dermatillomania community: shame, embarrassment, isolation, secrecy, and a hope to overcome one of the greatest challenge of our lives.

I have met many of the contributors of this book, including Rosenblatt herself, at previous TLC conferences. The first story comes from Katherine, a young woman who Sandy and I sat alongside on a success panel at a 2013 conference. She explains how much deeper trichotillomania is than its physical side effects; it’s “mentally crippling” and “emotionally exhausting”, while people (including doctors) dismissed her concerns. I relate to her struggle for a diagnosis, cycling through several professionals, and feeling like a “freak”, which also affected her view on dating and lead her down a path of suicidal tendencies. While she had maintained her recovery for years, after the release of this book I learned that Katherine relapsed, but has been 8 months pull-free as she hopes to give even more back to the community through her masters in mental health counseling.

Without summarizing each story, many of the themes of the book include childhood memories, school experiences, being parented (not always appropriately), and overall how the writers viewed themselves with a disorder they had no power over. The most noticeable feature that ties all stories is how much personal growth each writer shares, ending each with hope that even if you do not have the tools to overcome trichotillomania, you can still find solace by speaking to others with the disorder. And no matter what, it’s possible to love yourself more than you may today.

It may not be easy to eradicate the shame. As someone who has written a thesis on trichotillomania, Sebastian discusses how he is smart and has accomplished many things in his life, but that “not being able to ‘fix’ the fact that I pull out my hair has always plagued my mind and made me feel so awfully incompetent.” While many people with BFRBs share this sentiment, being a male with trichotillomania has additional challenges such as the discrimination for men to “suck it up” when it comes to mental health, and how trichotillomania predominantly affects women.

The forward in the book mentions that 1 in 50 people have trichotillomania. Of that percentage, roughly 80%- 90% of its sufferers are female. Rosenblatt includes stories worldwide from males and females of all ages in order to represent as many people as possible. Hopefully Rosenblatt will make a sequel that will include more people of color, the LGBTQ+ community, and people of various backgrounds so that she can continue to diversify the voices in the BFRB movement.

Rosenblatt includes her story at the end of the book. Instead of sharing my thoughts on her brave journey, I’ll let you hear her experiences below so that you must get to know the incredible woman responsible for bringing together 15 people for a moving compilation:


If you are a person who chooses a book by its cover you will not only be pleased with its beautifully framed artwork, but you will empathize with the powerful stories of pain and perseverance told through the lens of incredibly articulate survivors- many who have taken professional paths to work toward acceptance and healing from BFRBs. Whether it be through advocacy, becoming a therapist, or researching on behalf of the cause, it’s inspiring to know that there are many people who have gone through similar trials and have made a difference within our community so that no one else has to feel alone.