Earlier this month my Dermatillomania recovery story hit many major news outlets in the UK. I saw two variations of the same article on Daily Mail and Mirror, I knew I had been duped because I had not given permission to have it published, as I was promised when I had been contacted by a reporter. “Desperate Angela Hartlin…”, “Angela Hartlin is Lastly Cured of her dysfunction“, “… has a rare impulse control disorder” are among the nightmarish headlines now associated with my life because the opportunity to speak my truth was taken away from me.


Weeks ago I was contacted by Sarah Francis from Caters News who wanted to learn more about my recovery from Dermatillomania. Whenever I am contacted by anyone who wants to write a piece about this condition I go through a mini- investigation to learn about the organization and what type of pieces are published, along with how it’s presented to the public. While headlines of published articles on their website seemed to be hokey, the pieces themselves did not appear to violate the people who were written about and I couldn’t find any complaints or warnings online about this company.

While talking to Ms. Francis on the phone and through e-mail correspondence, I stressed my hesitations in telling my story because I want to make sure that Dermatillomania is respectfully and accurately reported on. With Caters News being located in the UK, my anxieties about how outlets in the past have went as far as being gory (with language such as “gouging out chunks of her skin“) and even fear-inducing. As expected, Ms. Francis agreed with me about journalistic integrity and went the extra step in promising that I would be allowed to proof the material before it went to publishers.

Furious, I messaged Ms. Francis who apologized and told me she didn’t know it would be published and that if my story is shared in the future with other outlets the changes I made will be reflected in those articles. My gut is telling me that it won’t be shared again and it feels like my story has, in part, become tabloid trash. I’m compelled to clean up misconceptions to how my story has been presented- if only for a piece of my mind.

Taking the seemingly most popular of the variations of pieces that have popped up on over 10 sites in 5 languages, the Daily Mail article is the best to dissect because its reach expanded to readers who shared it over 500 times: 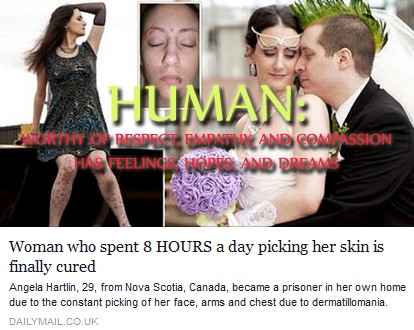 1. “Woman who spent 8 HOURS a day picking her skin – until she became a recluse and attempted suicide – is finally cured of her disorder thanks to therapy.”
Other than being blatantly disrespectful click bait, this is incorrect. I picked for up to 8 hours (not 8 HOURS) a night with that many hours picking being attributed to my early 20’s. Once I got a much better handle on my depression when I started advocacy, I was picking for up to 2 hours until I received treatment from Karen.

2. “…an impulse control disorder where a person is unable to stop themselves scratching.”
Excoriation Disorder was not categorized in the DSM-IV although it was mentioned as an impulse-control disorder. However, in May of 2013 when it entered into the DSM 5 as its own disorder it was classified under the “Obsessive-Compulsive and Related Disorder” section. As simplified as the writer’s definition is, it’s not incorrect but it doesn’t educate readers well on the complexities of this disorder.

3. “Doctors were baffled…”
They weren’t “baffled”, which to me is strong terminology that would describe doctors as being shocked. While some of my experiences with mental health professionals has been demeaning, dismissive, and downright abusive, no one was “baffled”.

4. “She eventually dropped out of university and refused to be seen in public, becoming a prisoner in her own home.”
Using definitive terms such as “refused” and “prisoner” sensationalizes my experience. It was difficult to leave the house, and there were days I wouldn’t leave the house, but I never defined it as being a prisoner in my home- maybe a prisoner of my mind when my depression reached its peak.

5. “…and her skin has completely healed.”

Most of it has healed but I am not pick-free. Therefore, it hasn’t “completely” healed.

6. ***A quick shout-out to many quotes that were noted without context***

7. “Ms Hartlin hit an ultimate low point when she went away to study.”
I never went away to study. I entered University in 2004, dropped out in 2006, and lived at home the entire time. I would bus from my city to the next one but I never “went away”.

8. “Her life changed that year, when the film was seen by an expert psychotherapist, who contacted her.”
This couldn’t be anymore false. Scars of Shame had been in the making for quite a few years and it was coincidentally released the same month I finished my 12 week treatment program with Karen Pickett in April of 2015. I ended up getting in touch with Karen in Dec. of 2014 after appearing on the CBS show “The Doctors” with her- one had nothing to do with the other.

9. The [uncredited] wedding picture taken by Gillian Drake that is used says that “Ms Hartlin’s beautiful wedding photos of her marriage to husband Jason show her incredible transformation.”
Also incorrect. The image shown is from my wedding back in April of 2014. I was still picking and even discussed my the details of my wedding day here.

10. “…suffered from a rare impulse control disorder…”
The great part about the media is that with enough articles being written about Dermatillomania, it looks silly for reporters to continue to call this disorder “rare”. With 1 in 50 people having a Body-Focused Repetitive Behavior, these conditions are quite common in varying degrees. With more people speaking out about their experiences, we are the ones who will be heard and articles like these will be seen as the sensationalism it is and the reputation of these organizations will plummet. The truth will come out.

I have always known that by being an advocate not only do I open myself up to possible interpersonal judgments from friends, family, and community, I knew that if I weren’t careful enough I could re-experience another Fox News horror segment (see below) that could challenge my will to continue my work in spreading awareness. Ms. Francis’ piece not only spins parts of my journey into a neat package that “works” for the appeal of a happy ending but she also feeds into more stigma with descriptive language that further isolates a sufferer.

There are real- life consequences for salacious reporting of medical conditions and those who have them. Luckily I have a support network now that allows me to gain perspective from other BFRB advocates who, along with family and friends, have encouraged me to see this experience as positive because there are people who have benefited in learning they aren’t alone. Also, my story has stretched farther than ever and the main message of hope for recovery has been sent out into the world. Many sufferers are still out there believing they are the only ones who pick their skin because this issue is not being addressed in our mainstream culture.

We are deserving of telling our stories without being violated by the media or fearing that we will be turned into a carnival act. While these series of articles could have been worse in nature, I cannot ignore that descriptive language opposite to my narrative has been used to describe parts of my painful journey in life and with this disorder. I cannot write or speak of anyone’s experience but my own although I hope that by voicing when this disorder is reported on incorrectly, I can bring back my truth and that of those who are seeking acknowledgement from the public that we exist. We are individuals with unique struggles who deserve to be treated with no less respect or dignity than anyone else. We are worthy.

My advice to Ms. Francis, Caters News, or any other reporter/ organization who wants to write on an individual’s personal experiences: pretend you’re writing about a loved one, someone who you would not want to see get exploited. Treat each person you’re writing about as if you care about their well-being and think about how an article such as this would affect their lives and your readers who can relate.

Check out the newly released documentary Scars of Shame and Angela’s memoir FOREVER MARKED: A Dermatillomania Diary. Like Angela on Facebook, follow her on Twitter, and join her with the hundreds of other BFRB sufferers on Tumblr.