I have a personal request to ask of everyone who comes across this post, sufferer or supporter. I have recently made a plea on Facebook to get Dr. Phil’s attention about having an episode on his show regarding the condition Dermatillomania. Earlier this year, he had a guest (April) who spoke about her skin picking but decided on coining her problem “Body Dysmorphia”. On and off over the years I have been asking for him to address Dermatillomania… but this time, I am taking a crowd- cheering approach. Unlike with my 1990’s technology used in the new millennium to record my video concern 7 years ago, I have learned that I cannot reach him alone. With many people writing in to ask for a show about Dermatillomania, the need shown through numbers may prove to be valuable to his production team.

With 163 gracious “Shares” and 109 esteemed “likes” attached to my Facebook image, my goal is for the share number to hit 500! The problem about raising awareness about a disorder like this one is that those who don’t know about it or aren’t directly affected don’t seem to care about the cause and won’t “share” while many sufferers don’t “share” because they fear being outted to their friends, family, and followers.

Here are all of the ways to get his attention to have me on his show representing the Dermatillomania community:

1. Facebook message: One way to help without friends or family seeing your actions online is to send Dr. Phil a message through his Facebook fan page to tell him that you want to see me, Angela Hartlin, on his show. You may personalize a message or copy and paste the following:

“Please have Angela Hartlin, leading Excoriation (skin picking) Disorder advocate, on your show to talk about this disorder and spread awareness to those suffering in silence. With her memoir “FOREVER MARKED: A Dermatillomania Diary” and documentary “Scars of Shame”, she is the perfect person to bring on the show to represent sufferers.

For further inquiries, please contact her at [email protected]
Sincerely,

2. The Dr. Phil website: Enter your information into his website with the above message copied/ pasted or personalize a message for him to encourage him to bring me on his show. While this isn’t exactly anonymity, you cannot be found out by friends or family by e-mailing him directly.

3. Twitter: Copy and paste the following (or create your own message with the correct hashtags)

4. SkinPickingSupport: “Like” this very entry by clicking the button at the top of the page and share it with your friends through any social media, blogging, or forum-based websites!

5. Tumblr: After a fellow advocate shared my plea on Tumblr and you can “like” or “reblog” this post to show your support. This can be anonymously through a pseudo-account or through a personal account if you’re comfortable to or not a sufferer, but a fellow supporter.

” I am sharing this image because Angela Hartlin has a disorder that has only entered the DSM 5 this year: Excoriation Disorder. With very little resources available, she wants to get through to Dr. Phil to get him to address this taboo topic on his show. Please “share” to help her reach out to people suffering in silence to let them know they aren’t alone. “

While many people have mixed opinions about Dr. Phil as a person, his credentials, and the way he conducts his shows, there is no doubt that his platform can be used to change people’s lives for the better. With being on air for over a decade, 5 days a week, he has only done one show about Trichotillomania and none (officially) on Dermatillomania/ Excoriation Disorder. Dr. Phil has the potential to touch a taboo topic and be the first talk show host to look at this debilitating disorder in depth. I will now leave you with my letter this year to him; thank you all very much for any share, like, reblog, tweet, message, ANYTHING that will reach out to his team. 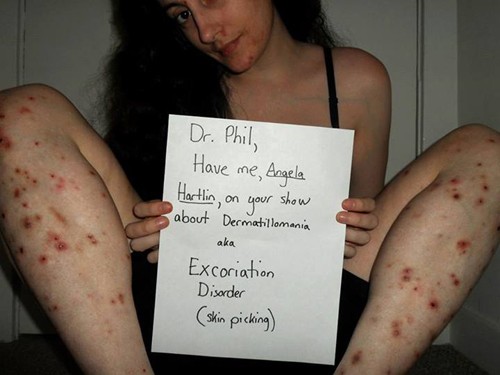 I am a 27 year old advocate for a disorder that many do not know of. There has never been a show done on the disorder I have, a disorder that thousands of people across the nation have.

With the DSM 5 being out, I am now officially diagnosed with “Excoriation Disorder”, which is compulsive skin picking aka “Dermatillomania”. You aired an episode with a young woman named April who picks at her skin compulsively but she was said to have had Body Dysmorphic Disorder and her picking wasn’t addressed.

As the author of “FOREVER MARKED: A Dermatillomania Diary” and star of the documentary Scars of Shame, I am the first person to open up to the world about this disorder and would love to be on your show to explain the damaging effects that this disorder causes to a person physically, socially, mentally, and emotionally.

I have appeared on CTV news, Fox 11 News LA, and in an article that was published by over 32 Canadian news outlets. I have been a strong advocate and still, sadly, the only one in the world who represents this disorder.

I am also still a daily chronic skin picker. I have made connections with the Trichotillomania Learning Center, aka, TLC, (who would do wonders on your show talking about Trichotillomania or Dermatillomania), spoke at their conferences and have run workshops. With no resources in my area to help me and thousands of others with this disorder, we still need vast amounts of awareness and you have an amazing platform that has changed many people’s lives. Many skin pickers are still suffering in silence believing that they are the only ones with this “defect”, as I did for many years.

I have read comments on your facebook page after April’s episode “Distorted Beauty” aired and am aware that non-sufferers are highly judgmental and can say very cruel things… but I know that by being on the show I can help change the stigma surrounding this disorder. I am at a place with myself that I am not asking for treatment because I’ve learned to function with this ball-and-chain disorder, but I know that this can be all-consuming because I almost ended my life 8 years ago due to the distress it caused me.

Looking on your forum in response to that particular episode, I saw someone had commented asking you to have me on the show to “show the world what Dermatillomania” really looks like. Unlike April, I have scars that will never go away and cannot be hidden under makeup.

Please Dr. Phil, please let me help the nation in getting the word out that this disorder exists. There are many experts willing to collaborate with an episode, all associated with TLC. See my website for more information about me, what I do for awareness, and feel free to call me or e-mail me with any questions you may have.

Thank you for your time and consideration.

To be the first notified of Angela Hartlin’s future updates, please click here to subscribe to her feed.