Awareness and Advocacy for Excoriation Disorder

A Decade- Long Journey with Dermatillomania

It has been one decade since my journey in FOREVER MARKED: A Dermatillomania Diary began. It was unknown to my nearly 20 year old self that I was writing a book back in 2006; I was only trying to find a safe outlet for depressive thoughts surrounding my compulsive skin picking while expressing what I […]

My Disorder is Not For Your Exploitation

Earlier this month my Dermatillomania recovery story hit many major news outlets in the UK. I saw two variations of the same article on Daily Mail and Mirror, I knew I had been duped because I had not given permission to have it published, as I was promised when I had been contacted by a […]

Why Everyone Should Participate in #BFRBweek

My Recovery From Dermatillomania

When my cat died in July of 2014, I was absolutely devastated and I took to writing to pay a tribute to him- a life that encouraged me through my darkest times and loved me unconditionally for 15 years. I told myself that there is no pain in the world as great as losing him, […] 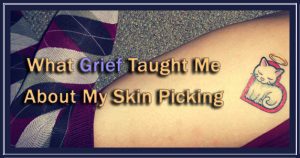 What Grief Taught Me About My Picking

Life has been a complete roller coaster for me these past 6 months. Aside from my usual debilitating back troubles, I got to marry the love of my life back in April… but when something amazing happens in my life, Newton’s Third Law “for every action there is an equal and opposite reaction” comes into […]

The Best Way to Describe Depression to a “Non-Believer”

The following article was rejected by The Huffington Post due to its length and although it isn’t discussing Dermatillomania, I felt it was relevant to publish here as it concerns mental health in general and affects many of us with this condition due to the lack of awareness of it, stigma surrounding it, and the […]

Compiled by Laura Barton, Project Dermatillomania: The Stories Behind Our Scars is an easy yet gripping read containing 11 stories of people with Excoriation Disorder who met each other through the Facebook group Dermatillomania Awareness. This book is simplified only in terms of reading level, but certainly not in content. If you are one of […]

“Derma Didn’t Stop Me” – The Best Day of My Life

At 7pm on April 14th, I kissed my fiancé goodbye as he was about to leave our apartment for the traditional “don’t see the bride until she walks down the aisle” deal. Our relationship is fairly traditional and we don’t have religious affiliations or rituals that dictate our course in life so we chose what […]

I knew something wasn’t right with my body during my pre- pubescent years, but I was told by practitioners that with a bit of physiotherapy my muscles would balance out and my body would be without pain in no time. Boy, were they wrong. By the time I got my first cashier job at 17, […]

I blatantly refuse to identify with the diagnosis of Trichotillomania. Why? It has nothing to do with the stigma or shame millions of other sufferers go through on a daily basis.

Read more
Cookies help us deliver our services. By using our services, you agree to our use of cookies. More Information